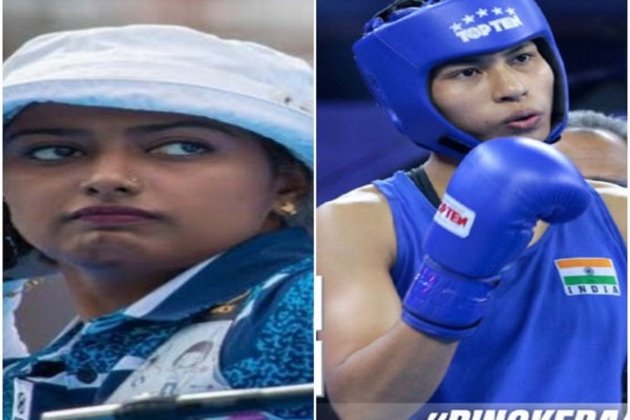 Tokyo [Japan], July 29 (ANI): Equestrian Fouaad Mirza and golfer Anirban Lahiri will kick start Day Seven of the Tokyo Olympics for India but all eyes will be on archer Deepika Kumari and boxer Lovlina Borgohain.

Deepika will compete in women's individual 1/8 eliminations while Lovlina will play her quarter-final match of the showpiece event. With Mary Kom's exit from the mega sporting event, Lovlina will headline India's charge in Boxing on Friday.

Lahiri overcame a shaky start to post a solid first-round score of 4-under 67 for a share of the eighth position on Thursday and the golfer will look to continue the momentum tomorrow.

Manu Bhaker was placed fifth and Rahi Sarnobat 25th, after the first precision round of qualifying in the Women's 25M Pistol, on Thursday.

Both Indians come back again on Friday at 5.30 am IST to shoot the second round while the finals are scheduled later on the same day at 10.30 am IST.

For the first time in the ongoing Tokyo Olympics, players from the Indian Athletics Team will be in action. Sprinter Dutee Chand, Avinash Sable, M P Jabir will all compete in their respective categories.

India will also feature in the 4x400m mixed relay event, which will make its Olympic debut at Tokyo 2020. Alex Anthony, Sarthak Bhambri, Revathi Veeramani, Subha Venkatesan will be in action in the mixed relay event.

Meanwhile, the women's Hockey Team will look to put the disappointing result against Great Britain on Wednesday behind them when they take on World Number 9 side Ireland in their fourth Group Stage match.

The equation for Team India is such that they must emerge with a win against Ireland to keep their chances of qualifying for the Quarter Finals alive.

The men's Hockey tea will also be in action on Friday. A resilient performance by India saw them register a thrilling 3-1 win against the defending Olympic Champions Argentina in their fourth Pool A encounter on Thursday.

This was India's third win in the Pool stage which has put them at the No.2 spot in the pool A table with one more match remaining to be played against hosts Japan tomorrow.