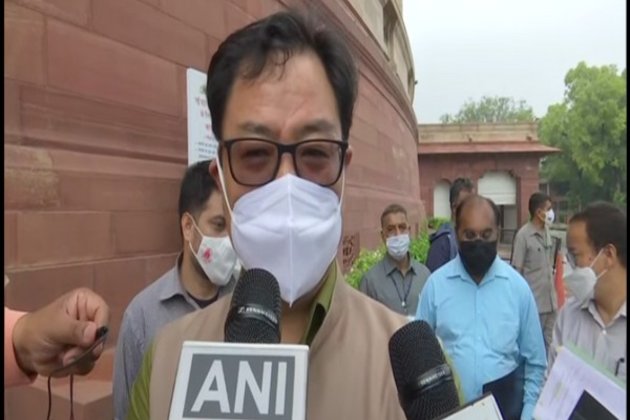 New Delhi [India], July 30 (ANI): Union Minister for Law and Justice, Kiren Rijiju on Friday said Mary Kom losing her bout at the Tokyo Olympics was "unfortunate" as she had won the second and third rounds.

In the bout, Mary Kom faced a shocking defeat -- split decision -- at the hands of Colombia's Ingrit Valencia to bow out from the ongoing Tokyo Olympics. Valencia won the match 3-2. Colombia's pugilist advanced to the quarter-finals of the showpiece event after defeating Mary Kom in the women's flyweight (48-51kg) category.

"There is no way we can challenge the decision that has been made at the Olympics. There are rules in place, it was unfortunate because Mary Kom won the second and third rounds, she lost by one point. I did not understand that, I have talked to IOA President Narinder Batra, we do not have the right to appeal, so I do not think anything can happen.

"I just want to tell Mary Kom that you are already a champion, you have been the champion six times and you are an Olympic medallist. Mary Kom is on different stature, she is already a superstar for us," the former Sports Minister told reporters.

On Friday, Lovlina Borgohain (69kg) assured India a bronze after storming into the semi-finals of the women's welterweight (64-69kg) category.

Talking about Lovlina's performance, Rijiju said: "I am super excited that our second medal in the Tokyo Olympics is confirmed. I must congratulate Lovlina for her lovely boxing. Lovlina is a hardworking and devoted boxer, she is young and prominent. She is from Assam and she has made India proud. The way she delivered in her quarterfinal, I am looking forward to the semifinal and hopefully, she will come back with gold." (ANI)