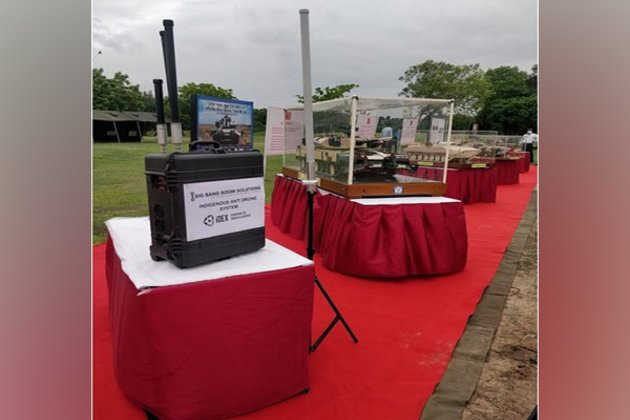 To mark the fiftieth year of our army marching into Dhaka; the year 2021 has been named "Swarnim Vijay Varsh" by the Government of India as the nation started the celebrations of 50 years of the 1971 Indo-Pak war. To celebrate the same, the Swarnim Vijay Mashaal (Flame) is now travelling across the country; visiting all military bases and homes of martyrs; before returning to Delhi for an event scheduled on 16th Dec 2021. Upon receipt at Army HQ in Chennai, a grand ceremony was held at the Dakshin Area Command Headquarters.

As an innovative twist to the event, BBBS, a Chennai based DefTech startup, executed a perfectly coordinated drone fly-past using their high altitude heavy payload logistics drone following the infantry and the horse cavalry regiments showcasing Chennai's tech capabilities and its deep integration with the defence ecosystem and lifestyle.

Commenting on the showcase, Dr. R. Shivaraman, Founder BBBS, said, "We are proud to have been a part of the event, and would like to take this chance to pay homage to the martyrs of India's war with Pakistan in 1971; by demonstrating our technology. We have also showcased our state-of-the-art anti drone defence system as a part of the display at the event and we believe that India now has the capability to arm and support its own defence forces using indigenous technology."BBBS's anti drone system has been tested and tried in the field by various sections of the armed forces including the Northern Command, the BSF, the Indian Airforce and the Army Design Bureau.

"Our anti drone system has undergone several field trials over the past 2 months after the Jammu attack and we have been repeatedly able to show world class paradigm defining ranges for both sensing and jamming of drones as required by the armed forces," added Dr. R. Shivaraman.

Their integrated system comes with a RF sensor, a RF jammer and a suitable AI based EO/IR system. The open architecture of the system allows integration of the radars and hard kill solutions such as the 22 crore DRDO's laser weaponry, which would make this India's first integrated anti drone system developed by a home grown startup.

"The IDEX program of the Ministry of Defence has been instrumental towards us getting to where we are. We are now awaiting the most important piece of this exclusive program - Procurement. This will help us plough money into further RD and create world class systems," says Praveen Dwarakanath, Co-founder of Big Bang Boom Solutions.

The event at Chennai was spearheaded by Lt. Gen Arun, GOC Dakshin Bharath on behalf of the Indian Army and presided over by Hon Governor of Tamilnadu, Shri Banwarilal Purohit and witnessed huge participation of civilians, DefTech startups, industry and various regiments from the south. At the event, all southern India Chakra awardees, and other medal awardees or their next of kin were felicitated.

Big Bang Boom Solutions was started in 2018 by Dr. Shivaraman Ramaswamy and Praveen Dwarakanath, both serial entrepreneurs with excellent track records. The company managed to win two prestigious iDEX grants from the Defence Innovation Organization, Department of Defence Production; and is on track to deliver cutting-edge technology systems to the Indian Armed Forces.

They also have other products which they have developed in-house and were displayed at the Defence Expo, Aero India and iDex at Abu Dhabi. They have been awarded multiple awards by Skoch, and recognized as one of the top 10 defence startups in India. They have been granted incubation facilities with T-Hub in Hyderabad and Forge in Coimbatore.

This story is provided by NewsVoir. ANI will not be responsible in any way for the content of this article. (ANI/NewsVoir)