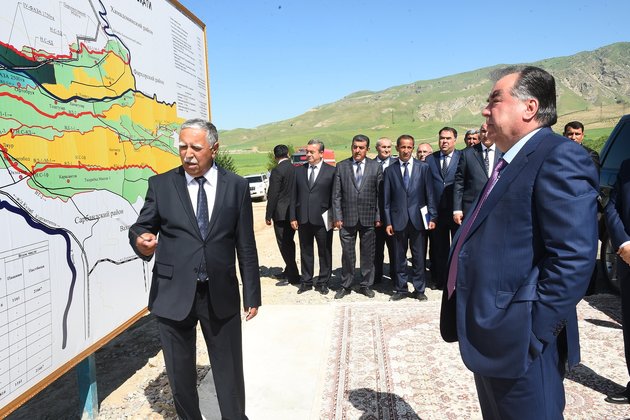 Tajikistan: President's home district to get a dramatic upgrade

Tajikistan will soon be getting a new province. And it happens to be where the president comes from, suggesting that the development will mainly be a new gesture of cult of personality politics.

Asia-Plus newspaper on July 29 cited the deputy chair of the Danghara district, Jamshed Sharifzoda, as saying that the number of provincial-level buildings that have been erected in the area more than justify the decision.

Upgrading Danghara to a province will entail splitting the territory now known as Khatlon, Tajikistan's most populous province at present, into two. It is not yet clear which districts will be tagged onto Danghara to make the conversion complete.

Danghara has seen a radical transformation in its fortunes from the times when it was a sleepy rural backwater. In the past couple of decades, which also covers a period in which President Emomali Rahmon has cemented his grip on power, it has been a permanent building site.

As Sharifzoda explained, the town of Danghara - a home to 25,000 people that is technically not even a city, but what is known under an unwieldy Soviet-vintage classification as an "urban-type settlement" - has in recent years gained a medical university, a major hospital and will soon have an international airport.

"An Interior Ministry building for the [future] Danghara province has been opened," he said, adding that premises for several other important government buildings are due for construction. "This means that Danghara will become a province, but when exactly this reformatting will happen is not yet known."

The town has also seen the construction of multiple high-rise buildings, the laying of smooth roads that are the envy of most other places in Tajikistan and even the installation of working street lighting - another rare sight.

Much of this is the work of minions eager to please their president.

Danghara district has, by some accounts, even grown slightly over the years, courtesy of road markings placed inside what used to be the neighboring districts of Nurek and Vose.

When the construction began in earnest in Danghara one decade ago, there was chatter that the capital might even be moved there one day. That would be akin to what happened in Kazakhstan in the 1990s, when the capital was moved from Almaty to Astana, later renamed Nur-Sultan, in honor of former President Nursultan Nazarbayev.

Dushanbe residents used to grumble at the notion, which they deemed an insult to their metropolis. But attitudes have evolved as irritation has festered amid perceptions that the city has undergone overly aggressive restructuring.

The capital has seen a relentless wave of demolitions of beloved old buildings that have often been replaced by rows of bland and dubiously constructed high-rise residential buildings. The trend has given sections of the city the vibe of a dormitory town, according to critics.

Today, the idea that Dushanbe's capital status could be revoked is greeted more favorably than in the past. Not least as it would mean that the city would not grind to a halt every time the president's motorcade was passing through the center - and this happens very often indeed - or important foreign guests come a-visiting.