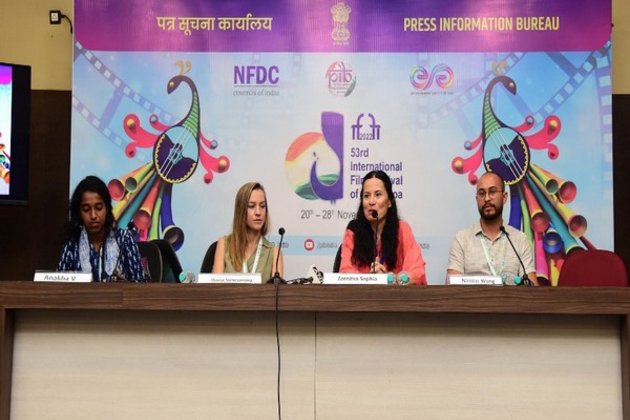 IFFI 2022: Makers of film 'I have electric dreams' say film neither idealises nor condemns complexities of relationships

Panaji (Goa) [India], November 28 (ANI): "This is a film that explores the passage into adulthood, which is a process that is not just about getting older. It is a process that is so profound that sometimes it can break people in a certain way. The film is much more complex than a mere coming-of-age story", said Nicolas Wong, Cinematographer of the film 'I Have Electric Dreams', while addressing an 'IFFI Table Talks' session at the 53rd edition of the International Film Festival of India (IFFI) in Goa.

Being a portrayal of modern-age Costa Rica's culture and difficulties of adulthood, Nicolas said that the film can help people identify with stories from the other side of the world and at the same time connect with family values or feelings that are universal.

In telling Eva, the protagonist's story, Nicolas asserts that Director Valentina Maurel tries to present an honest portrait of the complexity of life, free of moral judgement. "Without passing moral judgement, the Director tries to bring the audience to examine their own positioning in such complex relationships through this film", said Nicolas Wong.

When asked about the message the film will convey for the young generation, Nicolas stated that the film explores all the different shades of love and complicated aspects of growing up. Another key theme the film delves into is dealing with disparities in power dynamics with people you love. On the casting of Daniela Marin Navarro, a 19-year-old newcomer actress who played the protagonist 'Eva', Nicolas remarked that she has a very deep understanding of the screenplay and the character. 'It came just naturally with her. She was very calm and wise', he said.

Talking about the film, it follows the life of Eva, a strong-willed 16-year-old girl who lives with her mother, her younger sister and their cat, but desperately wants to move in with her estranged father. Clinging onto him as he goes through a second adolescence, she balances between the tenderness and sensitivity of teenage life and the ruthlessness of the adult world. 'I Have Electric Dreams' captures the thin line between love and hate, in a world where aggression and rage intertwine with the vertigo of female sexual awakening. (ANI)