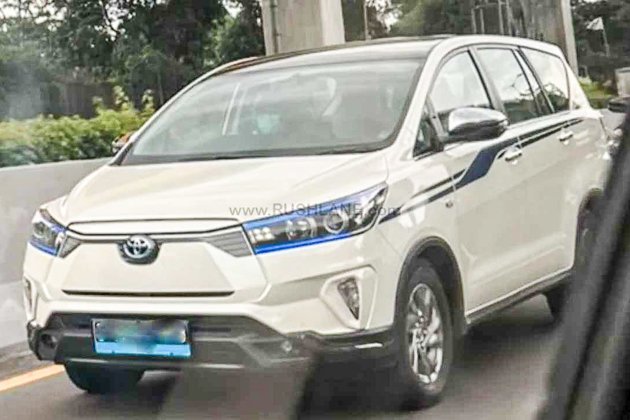 We have seen Toyota going full regalia with hybrid tech. Innova Hycross was recently launched in Indonesia as Innova Kejing Zenix. In India, it might bear the name Innova Crysta Hycross. That said, Toyota is also investing sizeable chunks of its R&D budget in pure EVs and PHEVs as well.

Earlier this year, Toyota showcased an all-electric Innova concept prototype at Indonesia International Motor Show (IIMS) in Jakarta. It managed to grab a lot of eyeballs across the world, especially in South Asian markets and India where Innova is popular.

concept prototype is a good example of Toyota electrifying its existing ICE vehicles along the way. Recently, this prototype is spotted undergoing testing on roads. Is Toyota considering utilising the older platform to make pure EVs? It is a stretch. But there is a good possibility of that happening. Let's take a look.

This is an interesting development because Anton Jimmi Suwandy, marketing director, Toyota Astra Motor, Indonesia, revealed that "Kijang Innova Electric will not go on sale and has been built as a concept for the purpose of engineering development only. Suwandy further added that the Innova EV concept is being used for research and development of future EVs that are being readied for the region".

Henry Tanoto, Vice President Director at Toyota Astra Motor Indonesia, also confirmed that the Innova EV concept is 'merely a study'. The concept is said to have raised the popularity of EVs in the community. Outgoing Innova Crysta is underpinned by IMV2 ladder-on-frame architecture which is designed to accommodate petrol and diesel powertrains.

Incorporating battery packs and motors in this platform is a major packaging challenge. Thanks to old-school construction that restricts space for batteries. Toyota might be investing in electrification of its current ladder-frame old-school vehicles like MPVs, SUVs and pickup trucks and more. There are segments like pickup trucks where robustness of ladder-frame chassis and electrification are equally important.

If everything that Toyota is testing with the Innova Crysta electric concept prototype checks out, we can witness electrification or even hybridisation of workhorses like SUVs and pickup trucks from the Japanese giant in the future. In North American markets, GM, Ford and even Rivian are offering electric vehicles that are based on ladder-frame chassis.

Even though Innova Crysta electric concept prototype is spotted testing on road, Toyota is not likely to launch an electric version of its MPV. Innova Hycross is already out of the bag and features a modern monocoque chassis with an FWD layout and a hybrid powertrain as an option.