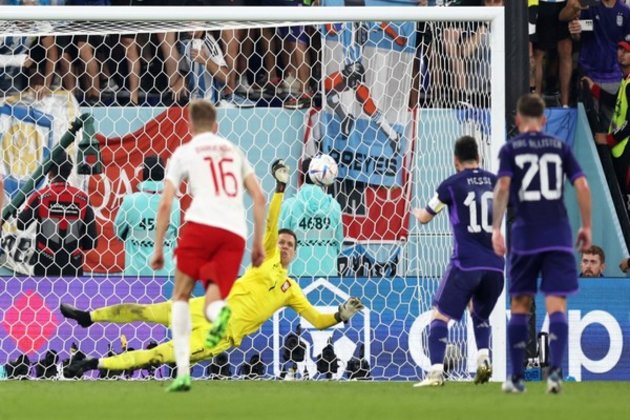 Doha [Qatar], December 1 (ANI): The trio of Lionel Messi, Angel di Maria and Marcos Acuna put lot of pressure with their aggressive gameplay, but a valiant Poland guarded their goal brilliantly, including a Messi penalty save made by goalkeeper Wojciech Szczesny in a goalless first half of Group C match between Argentina and Poland in Doha on Wednesday.

Starting off the match in an all-blue jersey, Argentina earned their first corner of the match. But it was guarded well by the Polish defence.

Argentina was extremely aggressive in their pursuit of opening goal and kept making chances for themselves in the first 20 minutes. They also enjoyed a great deal of ball possession. Poland were trying their level best to attack but every attempt of theirs was thwarted by Argentinians.

Messi could not convert the penalty into a goal and the goalkeeper made his second save of the tournament, a brilliant one-handed save this time around.

Three minutes were added to the first half. The first half was goalless but featured heavily aggressive gameplay from Argentina, some brilliant defending from Poland. (ANI)